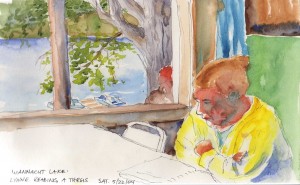 I’m honored to have lived in the country where women got the vote first, but for either the United States or New Zealand, I have to ask why it took so long. What were the paradigms that kept men from seeing that women could vote knowledgably and that they have valuable perspectives to offer?

Only a few years ago I learned that one central argument that women shouldn’t vote relates to the idea that women are fundamentally emotional while men are innately rational. According to members of Parliament in the U.K. a little over 100 years ago, “women are affected by gusts and waves of sentiment.” They are “impressionable” and have too much intuition (reported in a BBC article). Commonly, men referred to the “hypersensitiveness, unreasonableness, and loss of the sense of proportion” viewed as common in women (reported in an Atlantic article).

From what I’ve read, that attitude was common throughout the world during the 1800s. By 1900, a quasi-scientific tweak on that idea had developed: women are literally not made to think hard enough to figure out who to vote for. Mental exertion by women could jeopardize their reproductive health! I find this view both amusing and tragic. (See the same Atlantic article.)

I wish the men promoting that idea could meet Erin Heim, one of the brilliant Ph.D. students who I had the privilege of helping to supervise in New Zealand. Erin’s thesis, on the adoption metaphor in the Apostle Paul’s writing, is included on the list of exceptional theses at the University of Otago, where I worked.

I don’t know what gave Erin the intelligence and perseverance to complete her Ph.D. on time while having two babies, but I can recount some of the thoughts and feelings that come to my mind when I juxtapose Erin’s amazing achievement with the views about women so common in the 1800s.

I remember sitting in calculus class in high school, one of only two girls in that class. I remember how awkward I felt as a girl who was good at math. I disliked arithmetic in elementary school, but meeting algebra in junior high was like falling in love. I was entranced by all those patterns of the way numbers connected with each other. As I took more advanced math classes, I felt increasingly awkward. Girls aren’t supposed to be good at math!

I remember my first year after university. I was serving on the staff of InterVarsity Christian Fellowship, helping students learn to study the Bible and pray. One of my male colleagues once told me I was too emotional. I had no idea what he was referring to – and I was too insecure to ask. Having been criticized numerous times for being bossy, and having felt like an alien as a girl who was good at math, I didn’t know how to integrate his comment into my view of myself.

I remember being 34 years old and learning about the Myers-Briggs Type Indicator. The third preference on the MBTI refers to our decision making process. People who prefer thinking make most of their decisions using logic, or what they believe to be logic. People who prefer feeling make most decisions using values and people-based considerations. I have a preference for thinking, but only 1/3 of women do. My husband Dave prefers feeling, and only 1/3 of men do. Learning about those thinking-feeling preferences was deeply helpful for our marriage. I learned that many decisions that don’t seem logical on the surface are actually the best decisions because they take into account the personal needs of the people involved in the situation.

The thinking-feeling preference in the Myers-Briggs Type Indicator also helped me understand some of why I always felt a bit out of place as a girl and woman. I think the colleague who referred to me as overly emotional was picking up on my emotional intensity, not my lack of logic. After all, even the most logical person can become emotional about some things. And even the most gentle, caring person can use logical thinking. All of us, men and women, are sometimes logical, sometimes emotional. To use Myers-Briggs language, all of use what we believe to be logic sometimes as we make decisions, and all of us sometimes make decisions based on consideration of values and the needs of people.

I remember learning, maybe 15 years ago, that there are actually very few measurable differences between men and women, but the most significant fact is that range within each gender is so great that differences between any two individuals – men or women – can be enormous. In other words, even if more men than women are innately better at math (something I don’t think is true), some women will be much better at math than some men.

These are just a few of the memories that were triggered when I learned that a central argument against women voting is that we are emotional, not logical. What memories are triggered for you? What current situations do you think are still impacted by this view of women? What impact do these views have on you today? What do you think is God’s perspective on the gifts of men and women?

Next week: the 50th anniversary of the first Earth Day. Illustration by Dave Baab: Me reading a PhD thesis while on vacation in 2004, right before I began my own PhD studies. I love getting new subscribers. Sign up below.

My book on the Myers-Briggs Type Indicator and congregational life as well as personal spirituality.

An article I wrote on Myers-Briggs Type and Burnout

Lent began yesterday in the U.S, two days ago in New Zealand, Australia and Asia. Two options for Lenten devotionals: