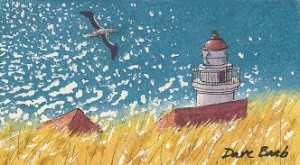 When I was a kid, being “nice” was super-important. The word “nice” covered so many areas of life: how you dressed, how you talked, how often you offered to help your parents or other adults, whether you were “seen and not heard” when parents were trying to talk to friends, and whether you played well enough with other children that you didn’t need parents to intervene in conflicts. Being “nice” involved going to church, but in my family we never talked about God at home, and we never read the Bible, so as a child I didn’t make a big connection between being “nice” and being a Christian.

For forty-some years of my Christian life, the Holy Spirit has been freeing me slowly but surely from the tyranny of trying to be “nice.” In exchange, I have received a small dose of freedom to be a bit quirky and weird.

I did a small informal poll of two friends, who I’ll call Sue and Jan, asking them their thoughts about this topic. Both of them experienced what I did as a child: an enormous pressure to be “nice.”  Both of them, like me, are on a journey to figure out the ways God is freeing them from that pressure. They used the words “interchangeable” and “inseparable” to describe the connections between the Christian faith and niceness.

Sue expressed curiosity about the fact that I was juxtaposing being “nice” with the freedom to be quirky and a little bit weird. Her words clarified for me that in my childhood, being “nice” was all about how you looked to other people. If you were “nice” enough, no one would ever criticize you. Therefore, being “nice” meant to adopt a kind of inoffensive blandness.

For Sue, being “nice” sometimes feels like a way to receive something in return: perhaps love or acceptance, or even the ability to keep your job because you don’t make waves. In a way, that fits with my family of origin. If people perceived me as “nice,” then my parents were admired as good parents because they had produced a “good girl.” My niceness got me something – my parents’ contentment with me.

I also talked with my husband Dave about the pressure he felt as a kid to be “nice.” He grew up with a very erratic mother, so his pressure to behave nicely in his home came from the desire to avoid her criticism and wrath. Outside the home, he tried to be “nice” with friends so they wouldn’t see how insecure he was. Dave became a Christian at 30, after years of being critical of Christians, so his freedom to be a bit weird began when he came to know Jesus. He definitely felt weird because he was choosing to embrace something he had always viewed as strange. In addition, the vulnerability encouraged in Christian communities felt weird but welcome to Dave, after a lifetime of trying to cover up his weaknesses.

Like Sue, Dave does not view the weirdness of being a Christian as the opposite of “nice.” For him, “the true opposites are being ‘nice’ and being angry.” Jan also discussed anger as an opposite to niceness, so next week I’ll focus my whole blog post on Holy Spirit disruptions in the area of feeling and expressing anger.

As a result of these discussions, I see that for me quirkiness and even weirdness are an expression of growing away from the kind of bland, conforming niceness that I was raised with. I wrote three weeks ago about finding friends in novels, a practice that began as far back as Nancy Drew books in the fifth grade. I’m proud that I enjoy spending time with characters like Anne Elliot in Persuasion, but I’m embarrassed by the fact that I have so many fictional friends in novels that are really not great literature. But I embraced that weirdness and found the courage to write about it three weeks ago.

I think part of why the World War 2 generation was so upset by hippies in the 1960s (my adolescent and teen years) related to the hair, clothes and lifestyle choices that were not “nice.” I know I’m still largely conventional in what I wear – clothes, jewelry, and hairstyle – but I have small moments when I let myself be quirky or even a bit weird in appearance. Those moments feel so good because they are a step away from the emphasis on conformity that I was raised with.

Christians who have prophetic gifts move far beyond clothes and imaginary friends as they learn to honor the gift God gave them to speak God's truth and be a little weird. All of us, whether we think we have prophetic gifts or not, need to listen to the Holy Spirit's guidance for when to speak out about what we see as true, even if what we're hearing from God doesn't fit the "nice" category.

Sue pointed out that the word “nice” is so vague. How much better, she said, to say people are “selfless, kind-hearted, have integrity, compassion, or something more specific.” That’s my goal this week. To work on the specific characteristics of love from 1 Corinthians 13, while letting myself continue to grow into being the person God created me to be, sometimes quirky and other times even a bit weird.

(Next week: learning about Christ-like anger. Illustration by Dave Baab. I love to get new subscribers. Sign up below to get an email when I post on this blog.)

Some favorites of my You-Tube videos: