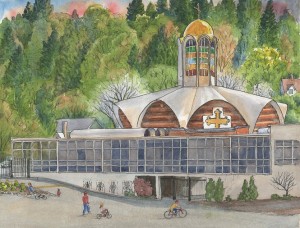 Hidden Art by Edith Schaeffer was published the same year that I met Mrs. Schaeffer (I was 19), although I read it a year or two later. It was the first book I encountered that talked about the creativity of God as the foundation for human creativity, a key concept that came like a giant AHA moment to me. In her book, Mrs. Schaeffer writes about creativity in domestic spheres like flower arranging, gardening, and making furniture.

I found the chapters about specific arenas of creativity to be a bit overwhelming in their drive for perfection and the need for high skills in each area, but I loved the notion that creativity isn’t just drawing, painting, writing poetry, or writing fiction – the areas of life I had previous labeled as “creative.” I had tried those four forms of creativity, and wow, I was really not good at them and didn’t enjoy them. Sure, I was good at writing essays for classes, but that didn’t feel very creative to me. That ability to explain things clearly in writing would later grow into articles, then books, blog posts and devotionals, a significant outlet for creativity for me now.

When I wrote two weeks ago that I have felt creativity impaired during the pandemic, several readers of this blog wrote to tell me they see my creativity in my writing. Thank you! But when a form of creativity is also your work, you need additional ways to be creative that satisfy only you – hidden art, to use Edith Schaeffer’s term.

After I read Mrs. Schaeffer’s book, I started light-hearted experiments with many creative things. I made my own Christmas cards in my early twenties using linoleum block prints. I still have those two linoleum blocks! I embraced sewing, knitting, crocheting, and playing the piano – things I already knew how to do – as creative outlets and found joy and lightness through experimentation with various form. I tried to express creativity through cooking and home decorating. Later I began to make greeting cards using collages of scraps of wrapping paper, and I still love to make cards that way. Through her book, Edith Schaeffer gave me permission and encouragement to experiment.

I want to go back and tell you about my personal interaction with Mrs. Schaeffer. I visited L’Abri Fellowship, the community founded by Francis Schaeffer in Huémoz, Switzerland, briefly during a long All Saints Day weekend while I was studying in France at age 19. Because of that visit, I became a Christian over Christmas vacation. I returned to L’Abri for two weeks at Easter and two more weeks in June in the formal role of student.

All students were invited to one of the homes of the permanent residents of L’Abri for Sunday afternoon tea. In June, I was invited to Edith and Francis Schaeffer’s home. I had heard Francis Schaeffer speak and preach, and I had seen Edith in the distance, but I had never had personal interaction with either of them. I asked if I could help, and Mrs. Shaeffer invited me to spread some kind of pate on crackers and put them on a tray.

After I did a few, she told me I wasn’t spreading the pate well enough. I really don’t know if her words were a critical statement that I just wasn’t measuring up, or a more gentle “thanks for your help, but can you please spread the pate closer to the edges of the crackers?” All I know was that I was deeply wounded that my attempt to help wasn’t good enough.

All kinds of “hidden art” in the domestic sphere, or other settings as well, can evoke perfectionistic standards. How much should we impose our standards on others who are helping us? What are the best ways to strive for our standards of beauty and also involve others in an affirming way? Despite that painful interaction with Mrs. Schaeffer, I am deeply grateful for her book because it opened up a new perspective on God’s creativity flowing into me as a women made in God’s image.

In this time of such chaos in so many settings – including, but not limited to, racial issues and the virus – I am thrilled to see so many people embracing a call to strive for creative solutions to big problems. I’m also so happy to hear about so many friends engaging in various forms of “hidden art” as well as drawing, painting, and writing poetry. We are made in the image of a creative God, and we can watch for human creativity in visible and hidden ways.

Next week: Creativity and the body. Illustration by Dave Baab: St Demetrius Greek Orthodox Church, Seattle, one of Dave's pandemic paintings. I love getting new subscribers. Sign up below to receive an email when I post on this blog.

Despite my frustration with my early attempts at writing fiction, I did ultimately write four novels. I’ve published three of them (mysteries) for Kindle. They are a bit of a series, with ties between the characters in the books: