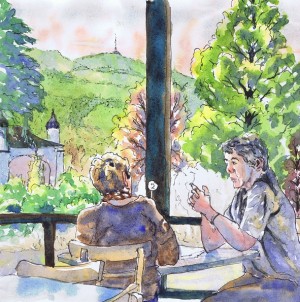 As a young adult, I was curious what it meant that humans are created in God’s image (Genesis 1:26-27). I started asking older and wiser Christians what they thought, and the uniform answer was that humans are rational like God. In the decades since then, an idea has exploded on the theological scene that humans are social because the Trinity is relational. Many theologians now argue that the image of God in humans is our drive and need to nurture connections with other people and with God. The level of sociability from one person to another varies, of course. The pandemic has shown many introverts that they actually do better with a smaller number of social contacts, while many extraverts have discerned the high need for sociability that helps them thrive. I have read about some people who seem to genuinely thrive best as hermits, but they are a very small number.

About a decade ago I wrote a chapter, “Toward a Theology of the Internet,” for an edited book. I argued that the internet functions in three ways that have theological resonance: as a place (like a library or third place), as a site for relationships, and as a venue where humans sin just like they do in all other parts of their lives. For the second section, I read quite a few of the theologians who have argued for a social view of the Trinity. If you’d like to read my summary of some of the theology of the social Trinity, it’s in the middle of the chapter, which I have posted here on my website.

Daniel H. Pink, in his description of how regrets can teach and empower us, argues that a part of how that happens is through our sharing with others how we are processing our regrets:

“By divulging regrets, we reduce some of their burden, which can clear the way for making sense of them. . . . In a pair of experiments published in the Journal of Personality and Social Psychology in 2006, Sonja Lyubomirsky of the University of California, Riverside, and two colleagues found that writing about negative experiences or talking into a tape recorder about them for 15 minutes a day substantially increased people’s overall satisfaction and improved their well-being—in ways that merely thinking about those experiences did not. The reason: Using language, whether written or spoken, forces us to organize and integrate our thoughts. Describing regrets to others converts those abstract, stomach-churning feelings into concrete, less fearsome words. Instead of those unpleasant emotions fluttering around uncontrollably, language helps us to capture them in our net, pin them down and begin analyzing them.” [1]

Pink focuses in on the power of language to help us organize and integrate our thoughts. And describing those thoughts to others helps them become less fearsome. As a Christian, I would add that God gave us language and its profound power so that we can connect with others, an essential part of being a human who was created in the image of a relational God. Pink acknowledges that many of us are afraid of disclosing failures to others because we fear that people will think poorly of us.

“But that is much less likely than we realize, behavioral scientists have been demonstrating for nearly 30 years. As Nancy Collins of the University of California, Santa Barbara, and Lynn Carol Miller of the University of Southern California concluded in a major review of the literature for Psychological Bulletin, ‘people who engage in intimate disclosures tend to be liked more than people who disclose at lower levels.’” [2]

Who could you talk to this week about one of the regrets in your life and what you are learning from it? How might you listen better when your friends or family members discuss their regrets?

(Next week: Daniel Pink’s third strategy for coping with regrets, extract a lesson. Illustration by Dave Baab. If you’d like to receive an email when I post on this blog, sign up below under “subscribe.”

I am thrilled to announce that my latest book, Two Hands: Grief and Gratitude in the Christian Life, is now available as an audiobook – Audible ($6.08) and Soundwise ($5.99) thus far. More formats coming.

The posts in this series on regrets: