Nature speaks about God: Tropical fish in the Red Sea 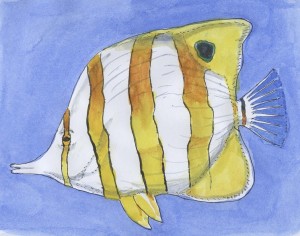 When Dave and I moved to the Middle East as young adults, we had never lived anywhere that wasn’t green. We moved to Shiraz, Iran, for Dave to take up a position teaching in a dental school.

Shiraz sits in a wide bowl at 5,000 feet, in a landscape best described as mountainous desert. The city is surrounded by completely barren mountains. After the green of all the places I’d lived, it took a while to see the beauty of stark mountains, especially vivid at sunrise and sunset.

We left Iran after only six months because of the impending revolution. (Our son wrote an article about our dramatic departure from Iran, complete with old photos of us.) We went to Israel on vacation, where Dave was offered a teaching job at the Tel Aviv University Dental School. We ended up staying in Tel Aviv 18 months.

We saw so many biblical sites and experienced the joy of a weekly Sabbath, which I have written about in many places (see below). I have never before written about a trip we took to Eilat, the Israeli town at the northwestern tip of the Red Sea.

Here the landscape reminded us of Shiraz. From Eilat, you can look southeast into the mountainous desert of Saudi Arabia with those same kind of barren hills we saw in Iran, gorgeous at sunset and sunrise but pretty bleak the rest of the time. The cloudless sky meant that the water of the Red Sea was deep indigo, a beautiful contrast to the dry, dusty landscape.

We had heard that the Red Sea offered world renowned scuba diving and snorkeling, so we rented snorkels and masks in Eilat and drove about an hour south along the west side of the Red Sea. To our left was the vivid blue water, with the barren mountains of Saudi Arabia on the other side of the water. To our right, we could see the equally stark mountains of the Sinai Peninsula.

At that time, the Sinai Peninsula belonged to Israel. Shortly after we were there, the Sinai was returned by Egypt as a part of the peace process. So as we drove south along the Red Sea, we were driving in what is now Egypt.

We found the park along the sea that had been recommended to us, and we snorkeled. Beneath the crystal clear water we found schools of beautiful fish. The visibility in the water was amazing, so we could see gorgeous fish close by and far away. Individual fish. Schools of fish. Blue, yellow, orange, red, silver, and gold fish. Small fish and big fish in abundance, a colorful contrast to the brown hills that surround the Red Sea.

Why, I wondered as I snorkeled, would God create so many beautiful creatures and keep them hidden from the view of most of the people of the world?

Those fish spoke to me about God. They seemed to say, “Yes, we are beautiful. Yes, we thrive in abundance here. Yes, we live our lives mostly hidden from view. God’s grace is just as beautiful, just as abundant, and sometimes hidden from view."

The lesson from the fish has influenced me for many years. Those fish I remember seeing in the Red Sea, and other tropical fish I’ve seen in Hawaii and at Australia’s Great Barrier Reef, have continued to talk to me over the years. They seem to say, “You’ve seen us and you’ve seen God’s grace. Remember what you’ve seen. Live in that abundance. Share that abundance with others. You don’t need to concern yourself with why God created us and caused us to thrive in a hidden place. Your job is to thrive in your place, trusting in the abundance of the God who made us all, living in his love and sharing that abundant love with others as much as you can.”

(Next week: Jesus in a boat at Greenlake. Illustration by Dave Baab. If you’d like to receive an email when I post on this blog, sign up under “subscribe” in the right hand column.)

Since Israel taught me most of all about the Sabbath, and since the Sabbath is a practice that teaches us to live in abundance, I’ll give you some resources on the Sabbath here.